The Iblea region is renowned for the harmonious and pure Baroque architecture that characterizes its old towns. Following the earthquake of 1693, all the towns were rebuilt in Baroque style with some of the most exquisite Baroque buildings and churches of Europe. Many of them are UNESCO Heritage Sites. Just to mention some of them: Ragusa-Ibla, Modica, Scicli, Ispica, Comiso, Noto. Or, slightly outside the Iblea region, one can see Caltagirone and its famed ceramics, Palazzolo Acreide and Piazza Armerina, world famous for its impressive mosaics housed in a Roman Villa.

Ragusa Ibla, 14 km. away, may be the most impressive of the famous Baroque centers of town in South Eastern Sicily. Here you can admire the extraordinary San Giorgio’s Cathedral, unique because of its architectural beauty and its strategic position, while tasting an excellent blackberry, lemon or almond granite, a local sorbet, in the square. Besides the Cathedral, the Old San Giorgio’s Portico is worth mentioning, as well as the Iblei Gardens and the churches within, the Palazzo Cosentini and the Palazzo della Cancelleria on the Salita del Comendatore’s street, San. Francesco’s Church and much more. However, getting lost in the labyrinth of streets and discovering scenic corners is what renders the trip enchanting. This town, which has become highly popular and is renowned for its cuisine, becomes very lively in the evening. All kinds of places are open until late; wine bars, ice-cream parlors, piano bars and restaurants of all price ranges. “Il Duomo” restaurant was given two stars y the Michelin Guide in 2008 and is considered to be the best restaurant in Sicily and among the top ten in Italy. However, it is just an example of the region’s culinary excellence.

The aristocratic town of Modica (25 km. from Cavalonga), has been capital of the county bearing its same name for centuries. It was a most coveted fief , which the Norman King Ruggero II gave Gualtiero di Mohac under the Aragonese rule (right??). Nowadays it is a wealthy and lively business center. If one chooses to enter it from Modica Bassa, on the Southern side, it is possible to drive on the right side of the corniche, which offers a breathtaking view of the houses, the scenic churches of San Giovanni, San Giorgio, San Pietro and the ruins of the Chiaramonte Castle. Coming down this panoramic road, it is worth delving into the bustling town in order to admire the churches of San Pietro and San Giorgio from every possible angle.

Scicli (35 km. away from Cavalonga) is a beautiful small Baroque town which is founded as a fortified district on San Matteo’s hill. It was initially established as a garrison against the Saracene invasions coming from the sea. As time and dangers passed, the district “slipped” into the valley and spreading into the crossroads of torrents and streams which were then characteristic and are nowadays only visible in a few places by the Carmine Church.

For those who would like a complete picture of the Baroque in the Iblea region, the small town of Ispica is worth walking through at sunset, when the lights of the Baroque theatre of Santa Maria dell’Anunziata are lit. The portico of V. Sinatra in Piazza Santa Maria Maggiore should not be missed. It is a classical and elegant example of urban architecture. The Liberty style Palazzo Belmonte should also be seen. It was designed by Ernesto Basile, the known Florio family’s architect.

Caltagirone is a town that looks like a crèche; clinging scenically on three hills. It is adorned by hundreds of shop windows displaying local handcrafts, by the center’s austere architecture and by the splendor of its gem-like colorful ceramics. There is actually an old traditional ceramic school, which has formed artists during centuries such as Vaccaro and Bongiovanni, whose pieces are most sought after by antique shops. A visit to the Ceramic Museum is a must. It is second only to the one in Faenza. No tourist gives up coming here to shop, but also to admire the S. Maria del Monte staircase with its 130 tiled steps, the town garden designed by Basile and the beautiful facades of the palaces, with some remarkable examples of the Liberty style. It is also possible to go to the famous puppet theatre, Teatro dei Pupi, by appointment. This is the last of its kind together with the one in Palermo.

Noto was the capital of one of the three administrative districts created by the Arabs (the Noto Valley) and the royal city from the Norman until the Aragonese periods. It was reconstructed on the connecting road that penetrates the Iblea region and portrays the most refined and sumptuous introduction to the baroque in this area.One can reach the gorgeous Corso Vittorio Emanuele, the former Royal Way, Via Reale, used for royal parades, passing through the Triumphal Arch erected in honor of King Ferdinand II’s entrance in the town.Corso Vittorio Emanuele crosses various remarkable squares until it reaches piazza XVI Maggio and its beautiful San Domenico’s Church.On the way, one crosses Via Nicolaci, and going up the street you find yourself under Palazzo Villadorata’s balconies, maybe the most emblematic expression of the Baroque imagery in the world. Before entering Via Nicolaci one must stop over at the famous Bar Sicilia, to taste the exceptional ice-creams and “granite”, local sorbets. From piazza XVI Maggio one goes up the street, on the right side, until one crosses Via Cavour, holding the palaces of the noble families, and reaches the public garden.

PALAZZOLO ACREIDE, Km 55, AKRAI in ancient Greek, was one of the colonies of Syracuse and was built on a hilly area. One can see the beautiful theatre, the remains of the Buleterion, the impressive baroque churches and the Annuok portal.

SIRACUSA, Km 130.this magnificent town on the sea is definitely worth a day trip. Not to be missed are: the Greek theatre and the beautiful island of Ortigia, a borough of Syracuse that provides a magical sensation to all visitors., with its small alleys, impressive palazzos and magnificent churches.

AGRIGENTO, Km 126. Is very famous for the Greek temples which, together with the Temples of Paestum, are the most important and better preserved Greek temples in the world. From Agrigento one can reach another important archaeological site: Selinute (100 Km away).

PIAZZA ARMERINA, 86 Km. is renowned for the Villa Romana del Casale, an ancient Roman villa with the most beautiful and well preserved mosaics. 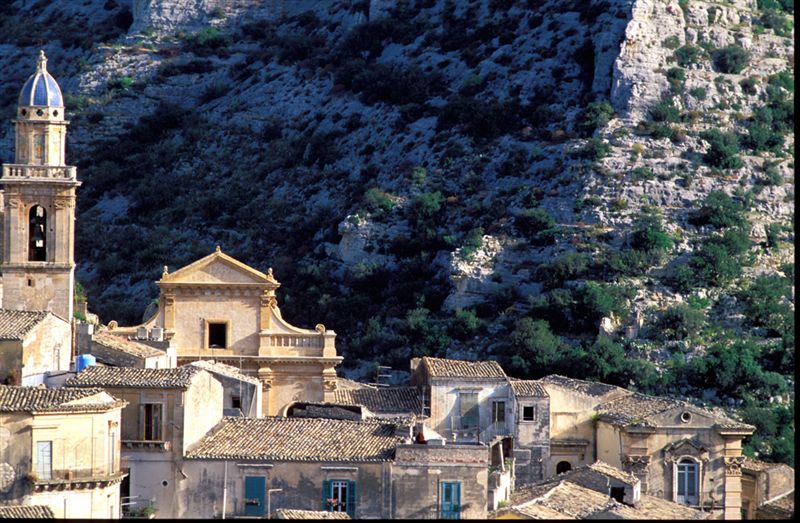 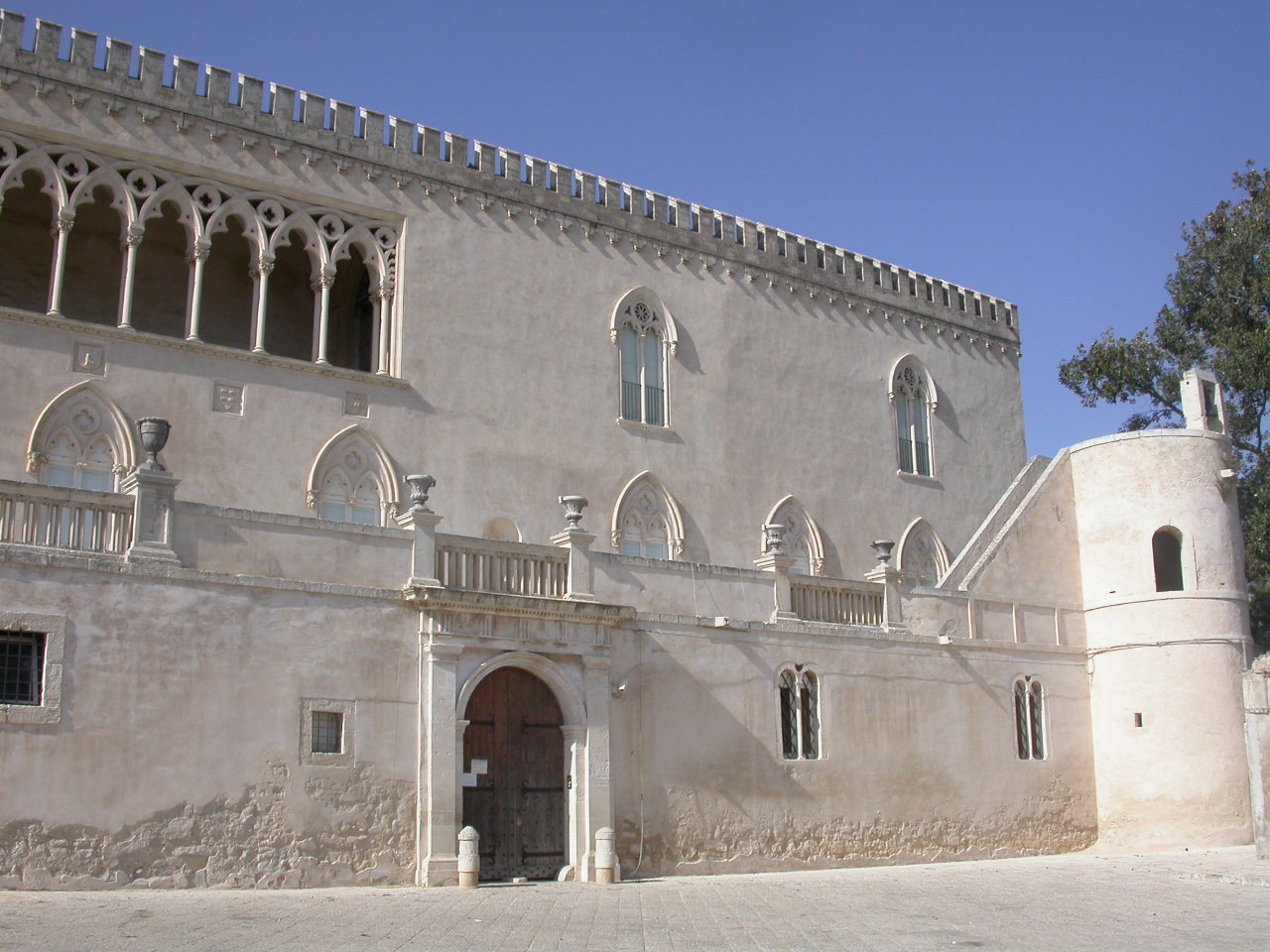 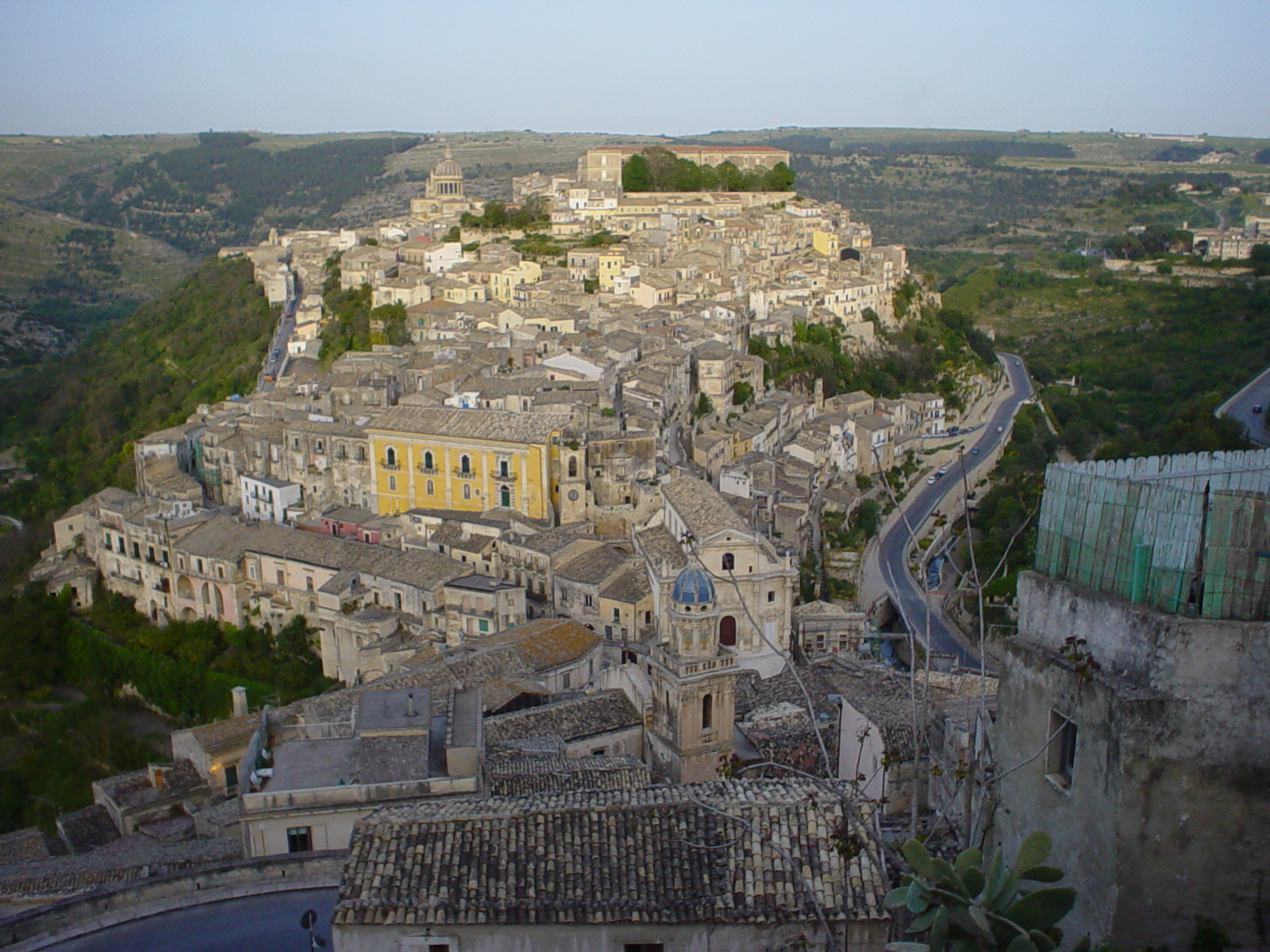 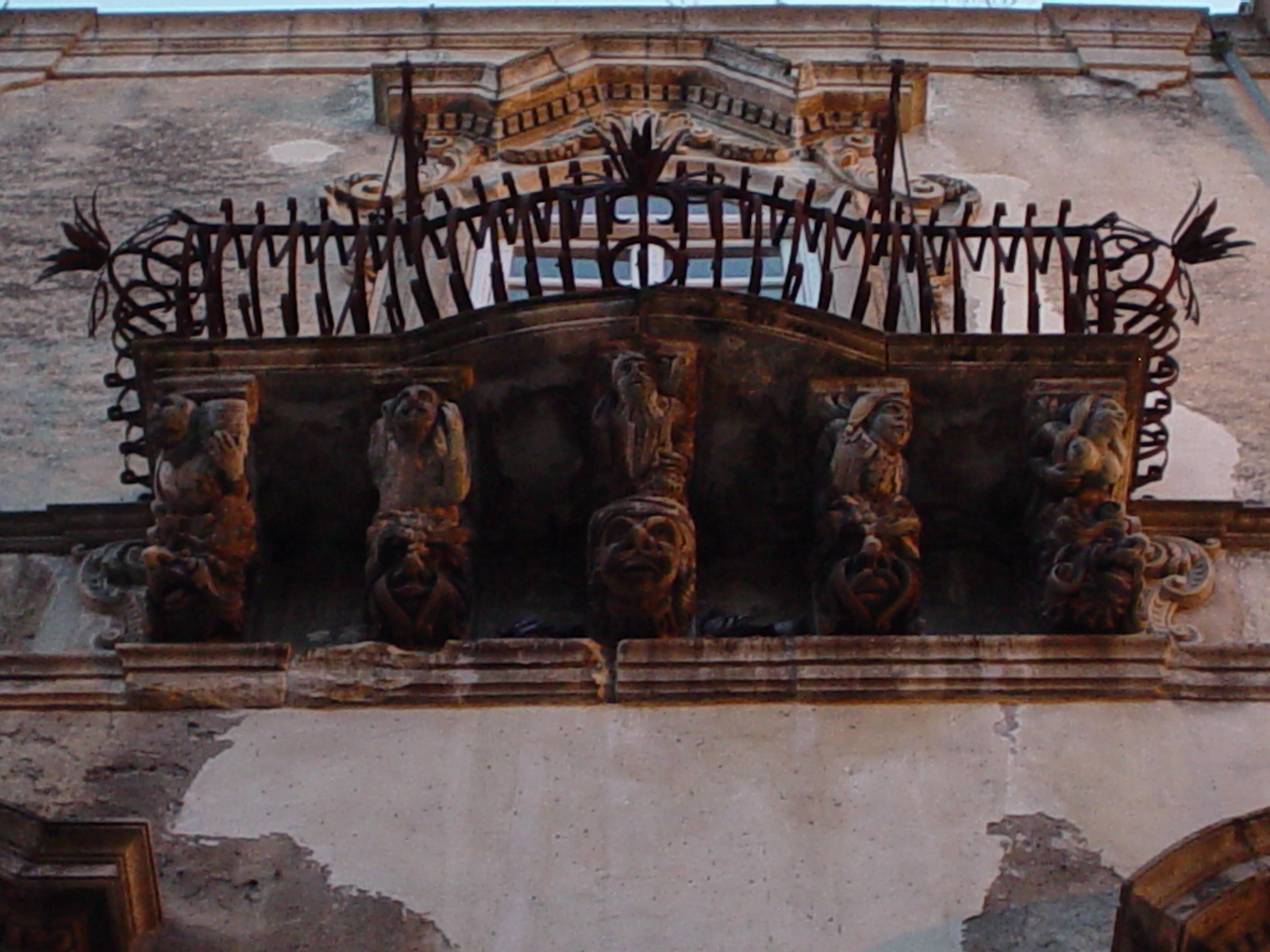 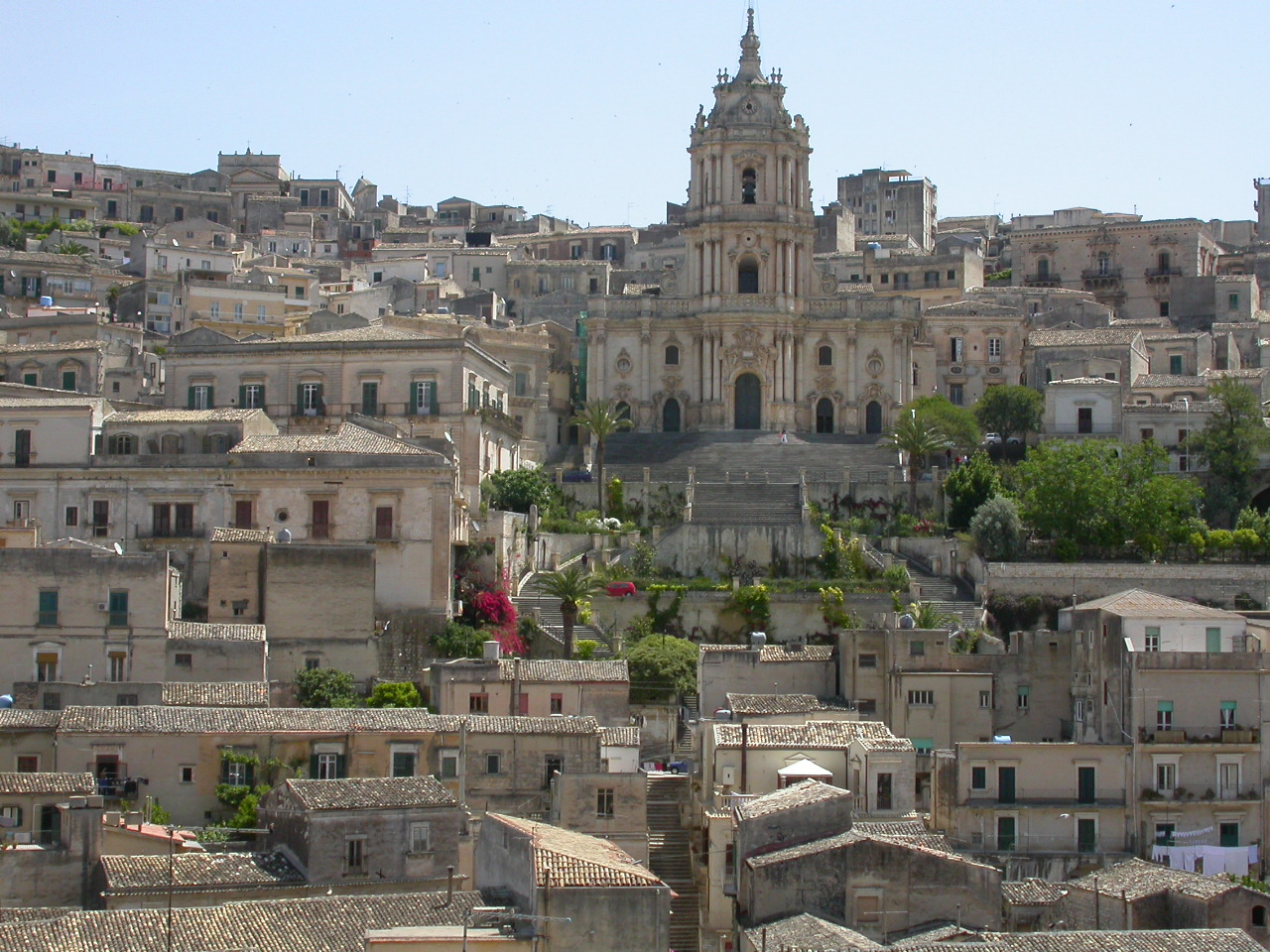 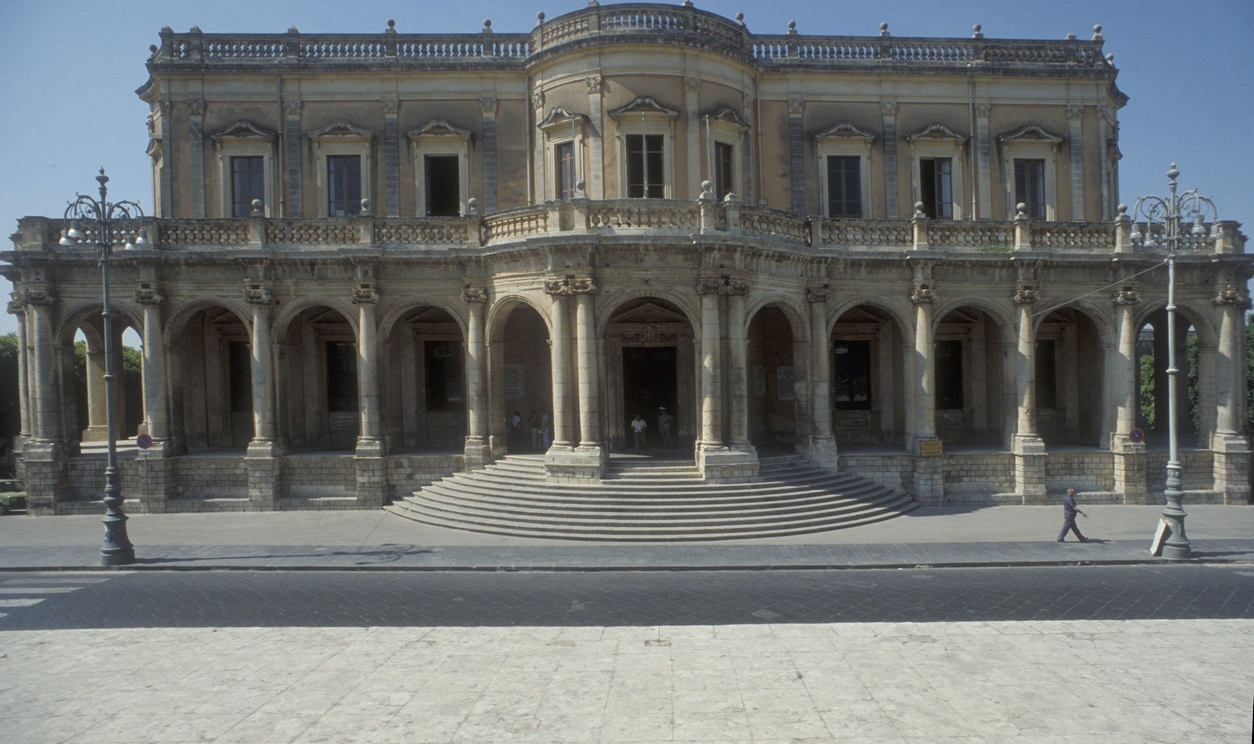